Each week Nikolas Badminton, Futurist Speaker, summarizes the top-5 future looking developments and news items that I find to be inspiring, interesting, concerning, or downright strange. Each day he reads through dozens of blogs and news websites to find those things that we should be aware of.
In Future Trends – Terrifying Smart Cities we look at Nvidia’a Metropolis platform, super efficient diamond batteries, the meaning of life without work, coding your own bank account, and China’s megacity investment. 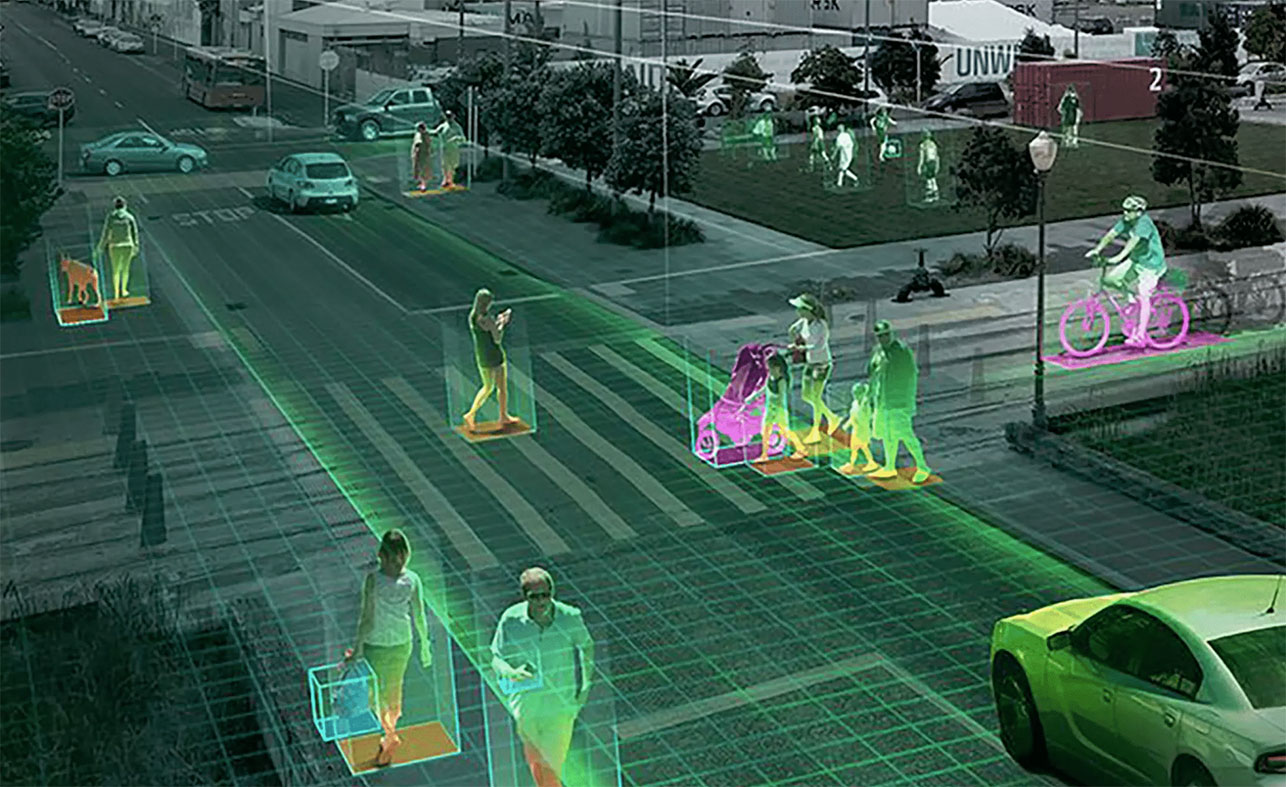 Nvidia has a vision for the city of the future, and it takes the always-on surveillance we’re becoming accustomed to and pushes it to whole new levels. The company’s Metropolis intelligent video analytics platform applies deep learning to constantly process and contextualize the masses of data streaming from the ever-increasing number of cameras watching us every day.
It’s one thing to have cameras watching at all times, but another altogether to do something useful with the giant stack of data they’re producing day and night. Manpower costs make sitting and watching it all unfeasible, but computers taking advantage of machine learning and artificial intelligence could. And this perfectly lines up with the new direction Nvidia has been pushing in for the last few years.
No longer just a graphics card manufacturer aiming to push more pixels in the latest first person shooter, Nvidia’s video processing and machine learning chips are starting to become benchmarks in a number of growing industries. For example, in industrial drones they’re helping to automatically recognize and track assets on large work sites, and in self-driving cars they’re taking a “watch and learn” approach to figuring out how traffic works.
Note: This is also quite disturbing:

Scientists have figured out how to use nuclear waste as an energy source, converting radioactive gas into artificial diamonds that could be used as batteries.
These diamonds, which are able to generate their own electrical current, could potentially provide a power source for thousands of years, due to the longstanding half-life of the radioactive substances they’re made from.
“There are no moving parts involved, no emissions generated, and no maintenance required, just direct electricity generation,” says geochemist Tom Scott from the University of Bristol in the UK.
“By encapsulating radioactive material inside diamonds, we turn a long-term problem of nuclear waste into a nuclear-powered battery and a long-term supply of clean energy.”
Scott’s team has so far demonstrated a prototype diamond battery that uses an unstable isotope of nickel (nickel–63) as its radiation source.
Read more at Science Alert

The meaning of life in a world without work

Most jobs that exist today might disappear within decades. As artificial intelligence outperforms humans in more and more tasks, it will replace humans in more and more jobs. Many new professions are likely to appear: virtual-world designers, for example. But such professions will probably require more creativity and flexibility, and it is unclear whether 40-year-old unemployed taxi drivers or insurance agents will be able to reinvent themselves as virtual-world designers (try to imagine a virtual world created by an insurance agent!). And even if the ex-insurance agent somehow makes the transition into a virtual-world designer, the pace of progress is such that within another decade he might have to reinvent himself yet again.
The crucial problem isn’t creating new jobs. The crucial problem is creating new jobs that humans perform better than algorithms. Consequently, by 2050 a new class of people might emerge – the useless class. People who are not just unemployed, but unemployable.
The same technology that renders humans useless might also make it feasible to feed and support the unemployable masses through some scheme of universal basic income. The real problem will then be to keep the masses occupied and content. People must engage in purposeful activities, or they go crazy. So what will the useless class do all day?
Read more in The Guardian

Root is a programmable bank account that provides flexibility and individualised solutions by allowing free development of bank interfaces and credit card rules.
There are lots of financial management tools and apps, but few give total control over settings, spending caps and displays. Fewer are linked directly to customer bank accounts. A new Cape Town-based programme called Root has the potential to do all of this and, at the same time, lead innovation in private banking.
Root allows customers-who-can-code the freedom to design their own account displays, rules and transactions. Even the accompanying credit card is programmable, so – for example – card spending limits or alerts can be set directly by the individuals according to their own needs and wishes. The new initiative comes courtesy of a collaboration between South African-based businesses, OfferZen and Standard Bank and led by app-innovator, Louw Hopley. They hope that by creating an open platform they will encourage innovations that will eventually reach beyond the coding community and be available for all.

Jing-Jin-Ji is designed to hold 110 million people and merge outer parts of Beijing, Hebei and Tianjin.
In April, China announced plans to create Xiongan, an enormous new city 60 miles south of Beijing which sits within the Jing-Jin-Ji urban megaregion. While details are still emerging about the future of Xiongan – which will cover the counties of Xiongxian, Rongcheng and Anxin, as well as the Baiyangdian wetlands – reports envisage a city that will grow to three times the size of New York. It will incorporate universities, institutions and residents from the capital, helping alleviate pressure on housing and public services – although not before prompting an initial land-buying frenzy in the area cited for development.
The government’s grand ambition is for “a strategy crucial for a millennium to come,” the official Xinhua News Agency reported. Morgan Stanley expects the investment in infrastructure and relocation to run about 2 trillion yuan ($290 billion) in the first 15 years.
Xiongan spans three counties. The infrastructure build-out will cover 100 square kilometers initially, expand to 200 square kilometers in the mid-term and eventually occupy a space of about 2,000 square kilometers, similar to Shenzhen now, the government says.
Read more at Next Big Future